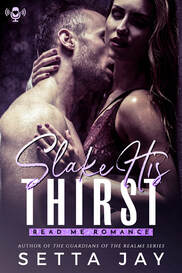 Sage has always been a little restless. From bounty hunter to bar owner, she still hasn’t found a purpose she truly enjoys. So, when she’s given a once-in-a-lifetime opportunity to visit the ultra-exclusive Aletheia resort, Slake, she jumps at the chance to get away and think. As a Mageia whose power is centered in plants and the earth, Sage assumes she’ll be more tempted to see Slake’s magical one-of-a-kind gardens than play with the sexy vampire-like Immortals all over the resort. Only, one beautiful man catches her eye, right before she inadvertently unleashes a savage magic best left dormant.

Lucius is constructing new security plans when he finds himself drawn to a seductive mortal guest at his father’s resort. When he realizes the sexy blonde is a security threat his sister has allowed onto the island, he sets out to learn all her secrets.

When Sage raises ancient magic that could threaten her life, Lucius rushes to save his tempting mystery woman. Only when he nears her does he realize she is the woman he has been waiting thousands of years to find. She is his.

Will the power Sage unleashes destroy her, or does fate have other plans?

Book one in the In Blood series will be released in 2021!