Destined to Crave - Descended of Guardians #0.5

This is a standalone spin-off series from the Guardians of the Realms world. Click any book cover to be taken to Goodreads to see reviews or add to your TBR. 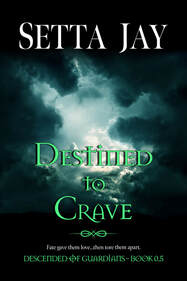 Available at:
Amazon / Amazon UK​ / Amazon CA​ / Amazon AU
Blurb:
​
The descendant of two almighty Gods and a Guardian of Earth, Eirykr “Rykr” is born of immense power. Yet, no amount of strength or skill can save him from the curse that tore him away from his first and only love. Turned into a shadowy assassin, he wields the demons bound to his soul with the ruthlessness of a blade. For nearly a decade, he’s searched for the key to free himself, all the while watching over and dangerously craving the beautiful mate who believes she’s driven him away.

Lucy is a born protector, a trait of her Guardian lineage. When her greatest gift was torn from her, leaving a gaping hole in her soul, she refuses to allow a young Rykr, her known mate, to suffer the same dire consequences.  Her fear forces her to make a haunting decision and with a grave threat, she crushes him, demanding they part for a decade.  Yet, as the years pass she can feel him watching her from the shadows, conjuring wild fantasies that make her ache for him to finally end their torment.

As time ticks toward the decade mark, dark forces rush to descend. Will Rykr’s secret and relentless need to protect Lucy condemn them to a hopeless destiny of constant craving?  Or will Lucy bind them for all eternity, no matter the violent threat to her very soul?

Book one in the Descended of Guardians series will be released in 2021!